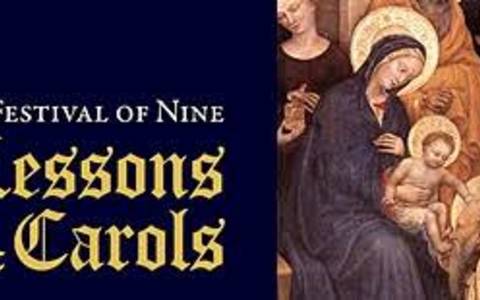 A Cambridge Christmas Eve tradition is coming to The Grand Halle
The elegant Gothic hall is decked for the season and filled with people ready to celebrate the arrival of Immanuel. There’s a momentary hush, followed by the solitary sound of a cherubic voice:
Once in royal David’s city,
Stood a lowly cattle shed,
Where a mother laid her Baby,
In a manger for His bed:
Mary was that mother mild,
Jesus Christ, her little Child.
So begins the Festival of Nine Lessons and Carols, the annual Christmas Eve service held in the King’s College Chapel at Cambridge in England. At 7:00 p.m. on Friday, December 21, that same service will be performed in Johnstown’s signature Gothic space: The Grand Halle on Broad Street.
This performance of Nine Lessons and Carols will feature organist Bryan Lohr, The Greater Johnstown Community Chorus, The Glory Ringers handbell ensemble, readers from the Greater Johnstown community and audience participation in the singing of traditional Christmas carols.
Recitalist Bryan Lohr will play a brief concert on the historic Adam Stein pipe organ 15 minutes before the program. The program’s lessons will be nine portions of scripture, foretelling the coming of a Messiah and telling the Christmas narrative from the Gospel of St. Luke. Between lessons, featured music carefully selected to reflect on the readings, will be performed, followed by a traditional carol sung by the audience.
In the King’s College tradition, the service opens with a solo child’s voice singing “Once in Royal David’s City.” Aria Parlock, a Grade Three student at Forest Hills Elementary will sing this special solo.
The Greater Johnstown Community Chorus will perform a number of traditional and contemporary Christmas selections, including “Do you hear what I hear;” “Still, Still, Still;” “Of the Father’s Love Begotten;” and “Candlelight Carol” among others.
“The former Immaculate Conception Church – now The Grand Halle – was a space created for music,” said Kim Rauch who directs the Community Chorus and organized the program. “I can’t imagine a more inspiring or fitting event here.”
Thanks to the sponsorship of Somerset Trust Company, tickets are only $10.00 for adults and free for students and children. But everyone must have a ticket. Both purchased and free tickets can be obtained online at link or by calling (814) 536-7986. Tickets also will be available at the door on a first-come basis. However, seating will be limited to 200.
The Grand Halle on Broad Street is located at 306 Broad Street, the corner of Broad and Third Avenue, in the Cambria City Cultural District of Johnstown, 15906.