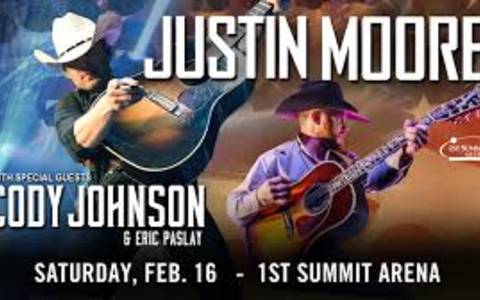 Justin Moore has recorded seven #1 singles, 15 top ten hits, one gold, and two platinum album. From classic hits, such as “Small Town USA”, to his recent #1 single “Somebody Else Will”, Justin Moore has become one of the few artists to churn out a decade of hit songs while staying true to traditional country roots. Joining Justin is Texas native, Cody Johnson, who caught the attention of Warner Music Nashville executives with the independent release of two top ten albums and accumulating 300 million on-demand streams. His first WMN album, Ain’t Nothin to It, is scheduled for release on January 18th, 2019. The first single, “On My Way to You”, has been released to radio and is currently at #34 on the country music charts. Rounding out the bill will be platinum selling song writer, Eric Paslay. On Saturday, February 16th, the three will take the stage at 1st Summit Arena @ CCWM for two and ½ hours of high energy and powerful country music. Tickets will go on-sale Friday, November 16th at 10am and be available at the 1st Summit Arena Box Office, by phone at 800-745-3000, and online at link ( http://link ).