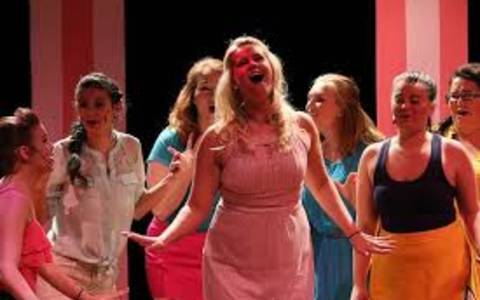 Mount Aloysius College Theater will present “Eurydice,” by Sarah Ruhl, as their spring production. The modern retelling of the Greek myth of Orpheus and his journey to the underworld to save his wife Eurydice will be presented on Thursday, March 22nd through Saturday, March 24th. Curtain call will be at 7:30 p.m. each night in Alumni Hall.
“Eurydice,” written in 2003, retells the myth of Orpheus from the perspective of his wife, Eurydice.  The story focuses on Eurydice’s choice to return to Earth with Orpheus or stay in the underworld with her father.  The “father” was a theatrical device invented by playwright Ruhl.  The original Greek myth has Orpheus bowing to his desires, looking back at Eurydice.  Ruhl’s version has Eurydice call out to Orpheus, causing him to look back.  The juxtaposition of choices is the stuff of great theater and innovative stage design.
Mount Aloysius Theatre Director, Nathan Magee, noted that his choice of “Eurydice” was driven by the beautiful story it conveys. “Eurydice is a challenging show because of that combination of classic Greek with modern theatrical conventions.  It moves quickly from location to location, bouncing from the Beach to the Underworld.  The play also includes many special effects such as rain, and an elevator.  The elements are highly theatrical, and that presents really fun problems to solve.  I had the concept of using digital projections to help us show the many highly theatrical moments on stage.”
“Eurydice” is a marriage of the old and new theater which will delight audience members. The cast is made up of 10 Mount Aloysius students and a plethora of support staff. The play will run with no intermission, and is approximately 90 minutes in length.
The cast of “Eurydice” is made of the following students: Eurydice, Rachel Borst; Orpheus, Alex Way; Father, Nathan Smith; Interesting Man, Seth Hull; Small Stone, Kylee Snyder and Nicole Petonic; Big Stone, Claire Kirsch and James Kealey; and Loud Stone, Courtney Moyer and Jordan Morrison.
The Production Crew includes: Stage Manager, Kolby Wasnick; Assistant Director, Pam Young; Set Designer/Projection Design, Sam Wagner; Costume Design, Jessica Davis; Lighting Design, Alice Oswald; Light Board Operator, Paige Ryan; Projection Crew, Veronica Scott and Hannah Holt; Costume Running Crew , Aubrey Anna and Rebecca Ryan; Scenic Construction and Box Office, Ian Koenig.
Admission is $5.00.  Area students at all levels may enjoy the show free of charge.  For tickets call 814-886-6684 ( tel:(814)%20886-6684 ).