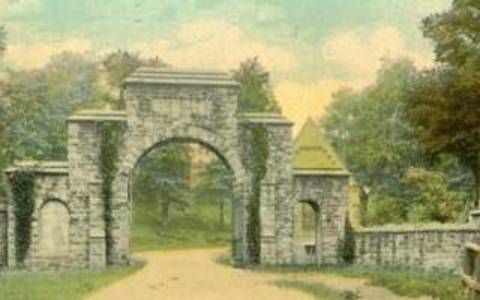 A 1 mile loop hike tour of Grandview Cemetery and its undeveloped ground. Developed portion can be driven, reducing the hike to slightly shorter out and back hike. Please be respectful of the cemetery setting. Roads closely follow the straight-line courses allowing you to avoid bushwacking over the graves. Look at the Attributes; this is NOT available after dusk.
In addition to the Chapin Arch readily visible along PA 271, the Grandview Cemetery also featured the Morrell Arch located along its original winding access road, which was built in 1887. The McMillen Chapel was also located adjacent to the Arch. This road was designed by John Fulton, an engineer with the Cambria Iron Company. Although it is now mostly wooded, the road featured an alignment that overlooked downtown Johnstown along its entire length, which led to the Cemetery name. Mr. Fulton had also conducted an inspection of the South Fork Dam in 1880, outlining deficiencies that, defiantly left uncorrected by the members of the South Fork Hunting and Fishing Club, led to the 1889 Johnstown Flood.
To find the remnants of the Arch and Chapel, park at the posted coordinates. You will find a row of 4 tombstones at the end of the road. Get Stanley’s year of death (19AB).
From this location, look for a window to the sky, located on a ridge at a bearing of 179º. Go to it and get George and Elaine’s wedding date (6/C/19DE).
You can see the domed memorial of your forth stop, described below, by looking at a bearing of 253º from the window. But before going there, walk 323 feet at a bearing of 188º to the resting place of America’s firstWorld War II flying Ace, a native of Johnstown. Get the years of Boyd's birth (19FG) and death (19Hi), along with his mother Elizabeth’s year of death (19JK).
From this grave you will find the large domed memorial 0.17 miles away at a bearing of 271º. You can’t see it from here; it’s behind the arborvitae left of the evergreen. The dome of this memorial was reportedly carved from a single piece of marble. Get Clement’s birth year – (18MN), SW of the dome.
At a bearing of 342º and a distance of 0.23 miles, you will find a single obelisk in the center of a circle. This is not directly visible from the domed memorial due to other vegetation. Daniel had been the general manager of the Cambria Iron Company. His wife purchased this plot on the first day that cemetery lots were offered for sale on April 25, 1887, and it was a memorial to her that the arch along the access road was erected. What was Susan's age (PQ)?
Walking 183 feet at a bearing of 8º, you will find the first interment at the cemetery. Get Lucretia’s birth year (18RS)